My son is convinced that one, just one, of his nightmares was real. When the night spills over the blue sky, and the house creeks to the tune of the witching hour, he remembers it. “Do demons look like aliens?”

The same question, always. “They can, but Jesus will make them go away.”

“I know, but He took a long time to make them go away.”

We discuss the settling of houses, and how they have to get comfortable at night just like we do. I remind him that shadows often look like scary things just like clouds can resemble bunnies. These conversations almost convince him it was just a dream. Was it?

But, the dark haunts all of us, morphing worries into nightmares. Failures are monsters. Most people in my line of work experience so many failures, they often lose sight of their purpose underneath all the wounds. Success is intangible; a ghost, and sometimes is takes a very long time to get a clear look at it.

I worry about my little guy and the scars he’s developing at such a young age. But

as we talk about shadows and monsters, holy week creeps by us and taps me on the shoulder, “Remember the curtain torn in two, the earthquake, rocks splitting open…the bodies of holy people rising from their tombs and appearing to many people? (Matthew 27).”

They weren’t the monsters—they weren’t aliens, or zombies, or anything that dwells in the dark splatter of night. They were spirits of victory. It took a lot of pain and blood for them to rise…it took a moment at 3 o’clock in the afternoon when God stepped away…and oh, did it seem like he was gone too long; utter forsaken agony, when all seemed lost…

As we carry our own crosses with monsters dumping humiliation after fear after pain upon us, and God seems so far away—we can take faith steps. We can breathe in faith and blow away the impossibilities, nodding our heads at the scary things rising, that are, in fact, signposts to victory.

Like a tumbleweed, the harried pace of summer has blown over most of the projects I wanted to do with The Children. But we managed to finish our City of Light.

My cell phone photos don’t do it justice, but light has a way of making it’s point either way. 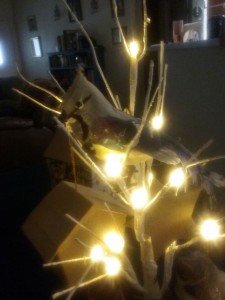 It’s easier for me to interpret the world in metaphor than every day vernacular which can make it challenging for me to explain God to them.

How He chases away darkness. How He’s here whether we see Him or not or if there are days where we only see Him in the beauty He creates, or the glow that accompanies His people that live free. 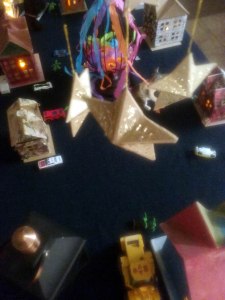 Either way, we made a visual and I gave them a true story I hope they remember in the dark of night, the dark of life.

May you remember how to chase away the nightmares.

P.S. If you’re looking for an adventure for the rest of your summer, Wake is on sale this week.

Sometimes, waking to a dark house is not just a dark house. Sometimes, in the deep of night when the stars have rocked our home to sleep, a foe slips in. Melding into our dreams, it shapes them into nightmares, shaking us awake.

One by one, we all search for sleep again. I tuck my little girl back in first, and being a discerning soul, she always requests an extra prayer on these nights.

Next, comes my son. I usually have to cuddle with him until he slips back into the land of nod or else he won’t find rest.

As I lay there, things drip. The house cracks and the scratching noises in the laundry room is not the cat for he sleeps deeply on the couch as twenty-year-old cats do. The dogs outside sense the foe and growl, announcing its presence to the neighborhood.

I can’t settle my legs. Despite my exhaustion, the foe thrusts his blade into the air, whipping up a battle that most people blame on the full moon. 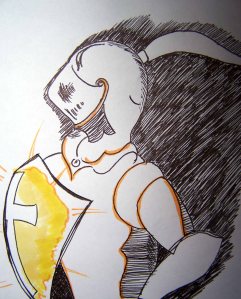 I pray and put on my armor. I guard my son until I feel peace because he has not yet found his own armor.

Boys need a special kind of Knight Light, for their battleground is a fierce one.

My son slips into even breaths and I lift my request to the King.

“Please let my son take up his armor soon. And let his Knight Light never dim.

Let it shine bright when it’s time for him to take a stand.
Let it not wane when a damsel tries stand in front of it.
Let it shine fierce if he or his fellow Knights get lost in the battle.
Let him keep it securely in place, so it doesn’t get snuffed out.

And lastly, let him never try to replace it with a generic version.”

Rom 13:12 (NIV) The night is almost gone, and the day is near. Therefore let us lay aside the deeds of darkness and put on the armor of light.

There’s a pocket of the night where you can see into another world. When I’m working the swing shift, watching over those who sleep, and the moon covers the earth in a silver sheen, I’m able to see through the darkness that normally threatens to morph into nightmares. I walk along the edge of a forest and see that most of the glowing eyes are not harbingers of doom. They aren’t one with the night, but have form of their own. Some of them slink along ditches and the creek bed, watching me for any sign of threat.

A word fills me: “I AM with you always.” I relax and go forward.

I meet some of those shapes who are lined with a white stripe of stink. They skitter around like lying politicians, threatening to defame those who disagree with them. I give them a wide berth, for here is a real threat; not of bodily harm, but how others will find me offensive due to another’s deception. I watch as they find their way to the dumpster.

This is my part-time job, holding down the fort and walking into the night while people slumber. It’s good, and bad, and certainly a different world in the moonshine. It’s kind of like my friend’s story. She calls herself a recovering (religion I won’t name). She said

she grew up in this church, believed in Jesus, knew who He was, but not until years later while she sat in a different place did she realize that knowing who Jesus is and knowing Him were two different things.

That revelation made all the difference. It was as if she stripped away the distractions that live under the sun, to finding His voice in the night. She now knows peace in the midst of trial, hope when all seems hopeless. “It’s like having a curtain removed from your eyes”, she said.

I think about this as I move on to the gazebo.

A raccoon fishes in the pond. He peeks at me for a small moment. He must recognize me and remember that I have a soft spot for his type of mask because he turns back to his fishing. He is bold and beautiful…I’m not sure that he isn’t an angel in disguise, keeping company with those of us that tread through the dark. I move on.

The flag whips around when a gust blows in. Its edges are tattered, but it never puts down its guard. As I look at this symbol that some salute and some defame, I understand why so many people think Jesus-followers are skunks. Those who speak in His name without really knowing him tend to repel people. I’m sure they mean well, and even intend to walk in goodness.

But you’ve got to be willing to follow Him despite the tattered and dark places, and for that, you really have to get to know Him.
Otherwise, the creatures who think I’m a threat, become the threat, and the night becomes one, big nightmare.

How do you enter this pocket of the night where raccoons might be angels?

For everyone who asks receives, and the one who searches finds, and to the one who knocks, the door will be opened. Matthew 7:8

Morning peers in the curtain and falls upon Noah’s cheeks. They are still baby-squish full despite his announcement that he is a big boy now. He smiles, then makes faces at me and his Sissy. The sun finds Chloe as she grins wide to show us the hole in her mouth. “It’s a straw-holder, Mommy,” she says as she slurps milk through the space that used to be her front tooth. The light is honey-lovely and dapples on chairs and bed head, highlighting the best parts of the morning.

I say the blessing and think: You are my Sunshine…

As the sun chases the shadows across the day, I peek at one. It covers the kids in the corner of the yard where they yell at each other, and then they hit. This pulls a shout from me and I feel needles erupt from my skin as if I’m a porcupine warning the darkness that crept into them. The shadow moves, ever so slow, but it moves on and my two are laughing again.

Noah comes and gets me when he can’t sleep. I snuggle next to him in his big boy bed and he whispers, “I saw a shadow moving, Mommy.” I hug him close and remind him that Jesus sends his army of angels to watch over us at night. “The shadows are nothing compared to them.” 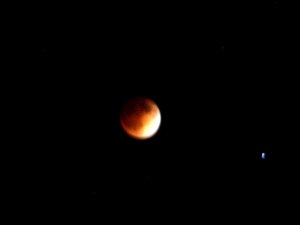 “Oh, yeah,” he says and slides into a good sleep.

I remember my own nightmare a while back where I was stuck at camp with all my fears. It was overwhelming terror, each cabin harboring a threat. The fear manifested itself into a figure dark as night. And then He walks in, my Sonshine. He walks to my right side and stands, the Lion of Judah in glowing warrior stance (The LORD watches over you– the LORD is your shade at your right hand…Psalm 121:5). I wake up, delivered.

The shade is not to be confused with shadow. Whether your shadows are tests,  monsters, or just a dark season, nothing can extinguish the light of God.