Our week of green grass and copious amounts of defrizzer has come to a close. Dipping our toes and hugs into the hospitality of the Deep South was just what we needed. The only thing I regret was the cold we brought back with us.

On the return flight home, the man next to me was every bit the gentleman. We discussed the book he was reading, our family reunions and our similar tastes in plane snacks. He offered to share his Cheezits and bag of chocolate-influenced candy; we laughed when I pulled out our own matching crackers and chocolate. When we ran out of conversation, he promptly fell asleep.

And then the southern-acquired cough kicked in. This was no ladies cough. It started 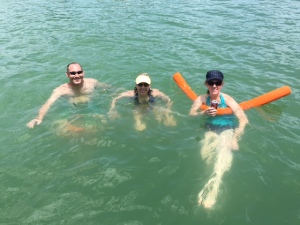 Every occasion is appropriate for Dr. Pepper

with that dreaded tickle deep within my throat–the kind you know is going to last an embarrassing amount of minutes–and erupted into a volcanic spewing monster sort of thing. I tried stifling it in the crook of my arm, my hand, my sleeve. I tried coughing with a drawl in the hopes it would sound more civilized, but I was unsuccessful.

The gentleman next to me, awake now, turned his head away, ever so slightly. His mouth closed, nostrils flared. Obviously, he was trying not to breathe my air.

Every now and then, he turned his eyes toward me in sympathy, but kept his nose and mouth in the cough-free zone.

When my cough finally began its descent toward manageable, he inclined his head toward me, ever so slightly, and asked: “You’re not choking, are you?”

I assured him it was from allergies, which at the time I thought it was. But when my kids started showing symptoms a few days later, I thought of our friend from the plane, hoping he managed to avoid my non-drawl, unladylike, monster-cold. If not, he had plenty of pages from Clan of the Cave Bear to keep him occupied for any sort of cough that may come his way. Such is the curse of airplanes and the blessings of books.

How is your summer winding down? Blessings for your week.