Is anyone tired of Shoppingmas season yet? I don’t understand how zombies, vampires and superheros can be so popular, so revered, and yet the only man with actual superpowers loses His holiday to a shopping frenzy. Sheesh.

I’m a bit tired of being sold-to this week, how about you? What I’ve really been enjoying is family. My family has been dwindling of late, but for Thanksgiving, my brother brought his girlfriend and her kids over to help celebrate–it was nice to have a few more people to make happy noises and eat turkey with.

We also discovered this.

It was mixed in with my Dad’s belongings. Once we finally realized how it went together, we were left wondering….what is it? I’m fascinated by this piece. Is it a cowboy relic? A simple family heirloom? A mystery that may have to be in my next book? Probably. There aren’t any manufacturer markings on it, and it’s obviously hand-carved. Want to take a guess?

I would love to know more about this, even if it’s just the time period. For whoever can clue me in on this (travel candle holder?) interesting contraption, will get a free copy of my next book, Wake.

My maiden name is Darwin. Before I married, there was a two year season where cashiers everywhere exploded in curiosity—my debit card said I was a Darwin, yet a cross necklace hung around my neck.

“Are you related to Charles Darwin?” (Yes, indirectly)

“Did he really disprove his theories?” (I don’t think so, but he was aware his theories were unproven ideas as opposed to the stance of our modern educational system)

One of my acquaintances criticized my decision to write Christian Science Fiction. Baffled, I asked, “Why?”

“Because science and Christianity don’t mix”, he said.

I was happy to inform him that The Bible not only contained science, but his statement was a shockingly unsound stereotype.

Lesson number one: don’t be afraid to do your own research.

Despite the fact that some religions such as Christianity are quickly becoming taboo and misunderstood, people still search for the God of miracles. No matter how illegal, unpopular, hated, and stereotyped He becomes, there will always be longings within the deepest parts of us that will cry out for answers far beyond our knowledge. This is not ignorance–it’s a journey toward the extraordinary. One of the most powerful expressions of this journey is the arts—paintings, music, literature–those things that speak beyond the questions we don’t have answers for.

Picasso expressed his heart well in The Geurnica–his reaction to the devastation of the Basque town of Guernica when the Nazi’s targeted it for bombing practice during the Spanish Civil war.

I wouldn’t hang it on my wall, but I can certainly feel the anguish. I can read about the incident in the history books, but with Picasso’s painting, I get it.

57 At this they covered their ears and, yelling at the top of their voices, they all rushed at him, 58 dragged him out of the city and began to stone him. Meanwhile, the witnesses laid their coats at the feet of a young man named Saul.

59 While they were stoning him, Stephen prayed, “Lord Jesus, receive my spirit.” 60 Then he fell on his knees and cried out, “Lord, do not hold this sin against them.” When he had said this, he fell asleep. Acts 7:54-70 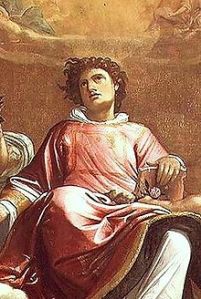 A man willing to die for Christ is a man who knows Christ. In his last moment, Stephan was able to exist here and beyond simultaneously. That’s a powerful bit of history I would hang on my wall. Waking up each day with a visual reminder that beyond is close enough to touch would make my steps a lot more purposeful.

But art can be dangerously powerful against those wishing to silence a people. What would happen if religion was outlawed? And then the expressive arts, because it encouraged rebellion? Sooner or later, history might “lose” documentation that would encourage people to rebel against these laws.

We would fall into forced ignorance…

But what would God do?

What if God decided to show a boxed in world how uncontainable He was? Who would He raise up to peel open the door to heaven?

What do you think would happen?

This is a story I’ll be bringing to you in my soon-to-be-released book, Wake, brought to you by the newly formed Darwin House Press. If you have any of your own theories, feel welcome to share them in the comments.