I saw an anaconda on Saturday. Even coiled behind glass, it looked fresh from a nightmare. As we took the kids along the many sights at the Game and Fish expo, I couldn’t help but wonder why God made the anaconda. Surely this thing didn’t exist in the Garden of Eden. Maybe it was some evil mutation that came from the curse.

The archery experience made me feel better. Like the target was a giant snake.

After grocery shopping the next day, I thought about all the exhibits we saw…the snakes, the animal skins (I’m not happy with whoever shot the raccoons), the hunters mingling with the conservationists. There was even a booth for those who wish to live in a self-sustaining community. All this swirled around my mind while I was leaving Fry’s, a few cars behind a guy who was dropping his girlfriend off for work. He took about five minutes to dig her purse from the back of his truck. His black truck with purple skulls on 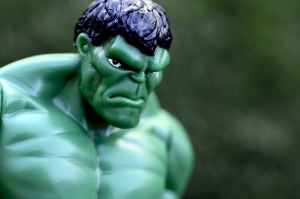 the tailgate. The car in front of me got tired of waiting and drove around the truck, much to the consternation of the skull-guy, who raised his arms at the car as if to say, “How dare you get impatient with me.” He took a few steps after the car and mouthed a few unsavories. Thoroughly entertained, I waited while the skull-guy handed the girl her purse and kissed her goodbye. Before he climbed inside his truck, he shot me a dirty look, threw up his arms—I think he even said, “Sssssssssssss”—at my, ummm…patience? The he drove off while flipping me off.

Is it the curse festering inside the man? I’m not sure life outside the Garden is always diagnosable. How was your weekend?