What better way to finish a good book than having the opportunity to interview the author? I’m talking to YA Author, Annie Douglass Lima today. Check out the end of this interview for a chance to win a gift card or digital copy of The Collar and the Cavvarach. It’s a hard book to put down!

S: Give us a brief description of The Gladiator and the Guard.

The Gladiator and the Guard is Book 2 in the Krillonian Chronicles series. I’d like to first give you the back-cover blurb for Book 1, The Collar and the Cavvarach, if I may: 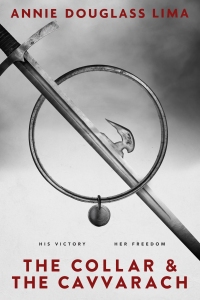 Bensin, a teenage slave and martial artist, is desperate to see his little sister freed. But only victory in the Krillonian Empire’s most prestigious tournament will allow him to secretly arrange for Ellie’s escape. Dangerous people are closing in on her, however, and Bensin is running out of time.  With his one hope fading quickly away, how can Bensin save Ellie from a life of slavery and abuse?

And now for The Gladiator and the Guard:

Bensin, a teenage slave and martial artist, is just one victory away from freedom. But after he is accused of a crime he didn’t commit, he is condemned to the violent life and early death of a gladiator. While his loved ones seek desperately for a way to rescue him, Bensin struggles to stay alive and forge an identity in an environment designed to strip it from him. When he infuriates the authorities with his choices, he knows he is running out of time. Can he stand against the cruelty of the arena system and seize his freedom before that system crushes him?

S: Take us into the world of your book. What goes on here that we should know about?

A: The stories take place in a world almost exactly like our own.  Although most aspects of the culture are just about what they are currently on Earth, a few sports are different, such as the martial art known as cavvara shil.  The main difference, however, is that slavery is legal there.

The Krillonian Empire rules much of the world.  An emperor, who is never named, governs from the capital city, Krillonia, on the continent known as Imperia.  Eight separate provinces (independent nations before they were conquered) can be found on nearby continents.  Each province, plus Imperia, is allowed to elect its own legislature and decide on many of its own laws, but the emperor reserves the right to veto any of them and make changes as he sees fit.  This seldom happens, however, and to most people the emperor is merely a vague and distant ceremonial figure.

The prevalence of slavery is probably what would stand out the most to visitors from Earth.  There are nearly as many slaves in the city of Jarreon, where both books take place, as free people, and they are easily identified by the steel collars they are required to wear locked around their necks.  From each collar hangs a tag inscribed with the slave’s name, their owner’s name, and a copy of their owner’s signature.  On the back of the tag is their owner’s phone number and a bar code that can be scanned to access additional information.

Many families own one or more slaves who do their housework and yardwork.  Businesses often own a large number of slaves, usually for manual labor, though some are trained for more complex tasks. Those who don’t own their own slaves may “hire in” one belonging to someone else.  The accepted rate for an hourly wage is two-thirds the amount that a free person would earn for equivalent labor (the money goes to the slave’s owner, of course).

To read more about the culture of the Krillonian Empire, take a look at this post on my blog.

S: What makes The Gladiator and the Guard stand out from other books in this genre?

A: I don’t know of any other books that take place in a world so similar to ours, and yet so disturbingly different in just a few key areas.

S: How did you get the idea for this book series?

A: I’ve had the idea growing in my mind for the last few years.  It started as just a picture of the setting and its culture (with legalized slavery), and the plot and individual characters emerged little by little.  The martial art of cavvara shil, which Bensin is proficient in, didn’t enter my imagination until just before I started drafting.

S. Does it relate to anything going on in our world today?

A: Not directly. I hope this story will make readers think about the value of human life and perhaps take a second look at some of the practices we accept or choose to turn a blind eye to in our own culture. Legalized slavery sounds so impossibly wrong that it’s easy to think we could never let it happen in this day and age, but how many other wrongs do we overlook just because it isn’t convenient to do anything about them?

S: What do you do when you’re not writing?

A: Besides writing, I enjoy reading (especially fantasy and science fiction) and scrapbooking.  Hiking and other outdoor adventures are high on my list as well as travel (especially internationally). Oh, and my day job: I’m a 5th grade teacher.

S: What’s next for you after The Gladiator and the Guard?

A: There will probably be one more book in this series, though I’m tossing around ideas that may eventually lead to other stories set in the same world. In the meantime, I’m working on a final book in my Annals of Alasia fantasy series, which should be ready to publish in the next few months. I also have a science fiction novel that I drafted for last year’s NaNoWriMo (National Novel Writing Month, in November). I hope to have that one polished and ready for publication in another year or so. Lots of irons in the fire!

If you want to connect with Annie, click on the links below:

Enter  Below to win an Amazon gift card or free digital copy of The Collar and the Cavvarach.

2 thoughts on “Chatting with Annie”