In college, I invited a few friends to my hometown. One of them, we’ll call him Nate, came from the city—a large city, with traffic lullabies and amazing theaters and bars full of clean and polished people. He was as Left as I was Right, but we both loved the arts and shopping, so our friendship blossomed enough to shade those conversations we tiptoed around. When he stepped a Birkenstock-wrapped foot onto my parent’s rural property, he grew quiet. And a little bit scared.

I suppose the sound of crickets…and not much else…was foreign to him. And of course, there were wide stretches of unoccupied land, a few neighbors with horses—it was somewhat like the contemporary westerns on TV. I suppose there were some bold ideas pounding on his head about small-town conservatives. You see, his lifestyle was controversial as well, but I had hoped our friendship was enough proof to show him that Jesus follower was the farthest thing from hater.

He eyed the saddle, the chaps, the fireplace—the only source of heat—and grew a 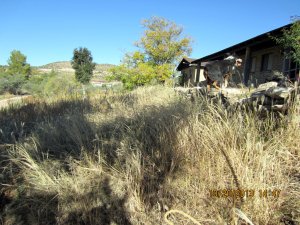 bit pale, I kid you not.

The gun shop next to the house.

And when we began to pray over the meal, he looked as if we were about to pull out The Lottery box and sacrifice him to the gods of harvest.

Shirley Jackson wrote The Lottery in 1948. In the story, a small rural town participates in a lottery every year—the unlucky person to choose the paper marked with a black dot must be stoned to death in order to ensure a good harvest. Even children weren’t spared from participating. I had to read this story a few times in my early education, and each time I hated it a little more. What was the purpose of putting readers through that?

So Nate, familiar with only the stereotypical version of small town life, nearly fainted when the theater of his mind nearly caused him to miss the fact that we ate supper with progressives and even enjoyed their company.

I was as surprised to discover how backward Nick thought small-towners were as he was to realize we didn’t reject him for his opposing worldview—there were plenty of people who did, though—I remember the taunts he had to endure when  walking through the dorms at school.

After our trip to the sticks, we returned to campus and laughed about it because friendship has a way of pushing through the muck.

But a few mornings ago, when reading the myriad threads of political discussion on facebook, I realized that we are indeed living in The Lottery–in more ways than one. The comment that reminded me of that horror story went something like this: “We need to stand behind Planned Parenthood because if we don’t allow abortions, we’ll end up supporting more low-income kids.”

That seemed to be the majority opinion—to weed out the low-income kids as if that sacrifice would cause our monetary harvest to grow. There was also mention of deformed babies, as if they had no more value than a weed in a garden.

Nate and I didn’t discuss everything in depth, but maybe we should have—maybe if more Lefts and Rights learned how to sit down at supper together, we could talk rather than throw stones through the safety nets of cyberspace. It seems as if that’s all we do now–throw stones and target those who are different. I’ve read the Bible. Jesus loves the outcasts, the crippled, the hurting. He came for them.

So here we are friends, smack dab in the Real-Life Lottery. But unlike in 1948, when Shirley Jackson received hate mail for her story, we’re embracing this lottery system and calling it progressive.

A tiny heartbeat, no matter how poor or different, is not a weed, but a life in need of Love.

“Explaining just what I had hoped the story to say is very difficult. I suppose, I hoped, by setting a particularly brutal ancient rite in the present and in my own village to shock the story’s readers with a graphic dramatization of the pointless violence and general inhumanity in their own lives.” –Shirley Jackson