My son tears through the house with his cape on. I still see a chubby-cheeked baby, but he is not. He is Superhero Noah. He is Thor, defeating the villains, Spiderman protecting his home from invaders.

When I sit him down to practice his letters, he frowns. Even S for Superhero doesn’t capture his attention.

I admit, I have concerns about him starting school in the fall. Is he ready? His legs don’t want to be tamed, they want to run, they want to pedal his bike…he is energy wrapped up in uncontrolled blond hair and smears of ketchup. 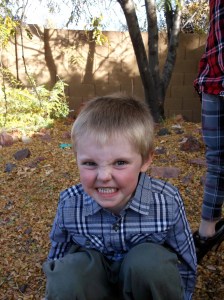 He does love books though. He will soak in a story—sitting still—and learn from any kind of adventure, especially if there is some kind of battle.

But if it’s not akin to The Very Hungry Dinosaur or Tyson the Terrible, he has no interest in learning the traditional way.

We read about David. David is a superhero for sure—small guy beats huge giant—Noah is all kinds of excited about that.

Something pops out at me about this story so I dig into it a little more—I even open a book I had waiting on my kindle and begin making my way to the heart of this small King, because no matter how often I have heard about him, flannel-board memories keep popping up and it loses something.

Until I focus on the slingshot.

It’s the slingshot. David doesn’t bat an eye at the seasoned soldiers or worry about his lack of experience. He doesn’t even consider that he doesn’t have a sword like everyone else has.

He hasn’t been schooled in battle. He is a harp-playing Shepherd.

I don’t think he cares about what he lacks. No—he draws upon who his God is, and the tools that God has placed before him and pulls out all he has.

Thump. He kills Goliath with a child’s toy.

What’s your slingshot? Tell us in the comments.