The saddle that rests in my Mom’s house is a family relic, displayed on its stand in the living room of brick and western hearth. It is draped in ropes and leather chaps my Dad made when he worked on a ranch.

“Ride ‘em cowboy!”, I would shout with spindly legs drowned in the chaps, hands gripped around the horn while I ran alongside the painted cowboy on the wall above the piano. Sometimes my friends joined me and we would ride off into the sunset of imagination, dreams yodeling over the horizon. 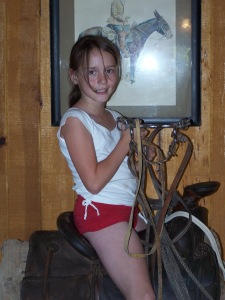 brother standing in the chaps with a rope hanging from his leather belt. 1st place for authenticity. The fringed leather legs got thrown back on the saddle while the spiders creep-crawled in the saddle bags that once held more than dreams.

The last year that Santa was real to me, my brother, Kenny, told me about his latest act of espionage, hiding under the saddle while the jolly old elf filled our stockings above the fireplace. I bet Santa never dreamed his cowboy career would betray his identity.

The grass wasn’t so soft when we pitched tents on the lawn layered in packed earth and stickers, but this is how our Dad slept in his round-up days – under the stars (without the tents) and drifting to sleep with the coyote song. It was especially great when we wound down the evening with my Dad strumming his guitar, singing Ghost riders in the sky and scanning the night for a shooting star.

Childhood fantasies danced alongside us, and above us, and in the dreams lighting up the darkness.

The awkward teenage movement cast the saddle into a shadowy corner, briefly drawing my attention for art class when I needed something to sketch. It was simply lines, texture and layers of dust. The western theme permeated those days. My school was full of cowboys, the mascot was a cowboy and the saddle stand stood without favor for a few years.

Baby showers and parties began to drape the stand in streamers, balloons hung from the saddle horn to celebrate another decade and it bore witness to a new trail of dreams.

The fringe ran down the chaps just the same and it stood there, holding up our new-found adventures along its neck like paternal support.

A cliche for one is life for another. Some call it a museum piece. We just call it The Saddle. How many people can say they were raised by a leather seat?

Do you have a family heirloom that speaks volumes? Tell us in the comments.