A recent bout with laryngitis showed me some very interesting things. For one, there are other ways to get a rowdy child’s attention than raising my voice. Listening is underrated, and worshiping comes directly from the heart, not from the amount or quality of sound. I wonder what would happen if we were all forced to show our intentions rather that fill up our lives with words….

The town was ordinary in every way until silence spent a few weeks inside its walls. It first infected Mina when she gathered her harvest together to sell at the market. Baskets of apples, squash and onions peeked over the brims as the quiet vapor entered her breath and settled inside. Step after step warmed her body and fueled it for the infection that settled in her throat.
As Mina sold her produce to practically everyone in town, they took home the silence as it slid along the apples and into their homes.
In the morning, as the call of ambition awoke the town, each shuffled into their own kitchen with appetites for a hot drink and a remedy.
While Mina tried to get her children dressed and fed, they could not capture their words to tell her of their sore throats or any other need. Little Mae was the exception. She couldn’t loose a voice she didn’t have. She smiled at Mina and signed about her whiny siblings.
With hugs given and kisses blown, Mina left Joel, her oldest, in charge while she left to buy supplies at the drugstore.
Furious gesturing and writing of messages filled the busy town. The loss of control threw the residents into a hurricane of impatience. Mina hurried through the town and headed back towards home. The only voices she heard on her walk were from those with feather and fur. The raw sound of creation touched her so deeply that she had to sit down and listen.

At the Saturday evening service, the congregation gathered in the park like they do until the first snow fall. Waves of light danced over the crowd being warmed by the fire pits. Mina snuggled with her family, hoping the town would understand the message tonight. Restless shuffling and anxious glances mingled with the silence. 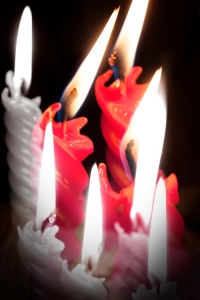 Pastor Jim, burly and calm, stepped onto a stone bench and held his arms wide, a candle in each hand. He smiled and looked around the crowd. Noel, his wife, stepped next to the bench, arms and candles like his. From in front of the old oak, and every corner of the park, someone stood, flickers and arms embracing the congregation. A basket of candles made its way around the crowd as they dipped wicks into fire and waited for guidance.
Seven guitarists walked to the center of the park and sat on benches. For the first time, Mina’s children sat still, absorbed in the ceremony amidst them. She pulled little Mae to her feet and knelt down, looking into sweet green eyes. “Are you ready?”
Mae nodded, reflections of light crowning her auburn hair.
The two made their way to the guitarists. A nod and arms held wide, Mina started the music. Deep wooden utterances, like those trees that were shaped into instruments, strummed into the hearts of the mute. Chords were so masterfully played that the missing words among the people were forgotten and hearts rose to join creation.
Mina and Mae sang with their hands. They sang from the depths of their souls, making an inaudible language into a dance. The glow from the fires bathed them in light; red hair and white dresses, flames of glory. The town, shed of egos, were led into authentic praise. Filled with the spirit of Him who shaped them out of the dust, they rose together and worshiped on holy ground.

“You are the light of the world. A city on a hill cannot be hidden. Matthew 5:14

God is greater then our struggles. He is greater than our screw-ups and flaws. He can take something ugly and use it to shine His beautiful light on the world. Stop looking at the flaws and live in His miracles.

Have you found a roadblock that led to a blessing? Tell us your story in the comments!