Have you ever heard anyone in the last stage of their life say they wished they had mastered the fitted sheet?

Seriously, how much time is wasted trying to tuck the gathered corners into perfect angles, compressing that sucker with the same precision as the top sheet?

I don’t know about you, but if the sheet fairy came to inspect my closet, she would find the downy-soft wad crammed into the most available corner. It’s clean, isn’t it?

What would you do if Jesus were to stay at your house? You know He’s One, 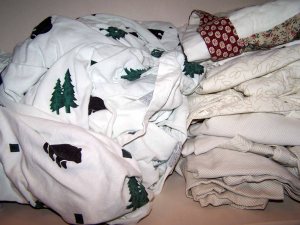 exhausted, King of Kings, that has tread miles in dusty sandals to heal, to forgive, to bring peace to our broken world. Why wouldn’t you clean every crumb, dust every corner, prepare your best dishes for Him? He made you, counted every hair on your head, provided for the very roof you sleep under, including the fitted sheet on which you lay your weary head.

He deserves your best.

A childhood friend invited me to her house- we might have been 10. I was excited – her parents had built their own house like mine did –how many can say that? It takes a very hardworking couple to sweat and save in hopes of sleeping under their own custom made roof. It was southwestern chic, small but charming, and they had a few wild acres that met their backyard where we ran with her three younger siblings, playing with their dog, Ginger, who got renamed every month just to keep her new and exciting. It was Popsicle and Kool-Aid fun.

Seriously – every surface was coated in its sticky, grime-attracting layers.

I could have finger-painted the word, toxic waste, in its very lived-in surface. The family was sugar-coated sweet, and to be fair, they had four kids, but their house was a job for the CDC. I don’t think they ever worried about taking the fitted sheet off the bed, much less try to fold it properly.

After that, I invited her to my house. It wasn’t perfect, but it was sanitary.

So when I became a wife in charge of my own home, the nightmare of the toxic house haunted me and I started scrubbing every surface…it MUST smell Lysol clean.

And then we got a few cats, and a few more, and then our kids came along and, well, things aren’t so tidy, and the fingerprints became the accent wall, if you know what I mean (But the germs won’t eat you).

I began to think about the Kool-Aid coated house, and understood that the kingdom of heaven is not built with the labors of Martha Stewart perfection.

What would Jesus say?

As Jesus and his disciples were on their way, he came to a village where a woman named Martha opened her home to him. 39 She had a sister called Mary, who sat at the Lord’s feet listening to what he said. 40 But Martha was distracted by all the preparations that had to be made. She came to him and asked, “Lord, don’t you care that my sister has left me to do the work by myself? Tell her to help me!”
41 “Martha, Martha,” the Lord answered, “you are worried and upset about many things, 42 but few things are needed—or indeed only one.[a] Mary has chosen what is better, and it will not be taken away from her.” Luke 10: 38-42

(Is it the name Martha?)
Yep, go ahead and stuff that fitted sheet in the corner. Don’t even attempt to fold it. You might want to wash it so your guests don’t lie awake wondering if those creepies underneath them are living, but don’t waste your time on perfection.
Only God can do that.
And according to Luke 10, the fitted sheet is a waste of time.

Do you have your own thoughts on tidy homes? Great stories? Tell us in the comments.