After two years of struggling with eyeglasses digging into my nose, I’m trying contacts again. The first thing I noticed: my feet look two sizes bigger. What’s up with that? I gained one vanity to lose another.

I’m not sure which is more accurate…do my eyeglasses flatter me into thinking my size 9’s are daintier than they are, or do my contact lenses give me the cold hard truth: I must have Goliath DNA to have feet this big. At least they get me where I need to go.

Have politics infiltrated the vision industry? Because my eye-wear predicament is a lot like watching the media binge over the Presidential candidates right now. Ben Carson is good. Ben Carson is bad. He looks like THIS from the front row at the debates, but like judging from that last clip on the evening news.

Hilary’s charming her way into the Left’s hearts again.

And according to the media lens, Trump is one controversial comment away from 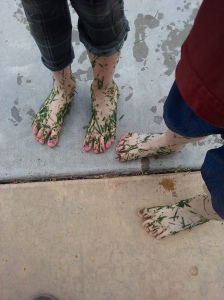 How many people would vote for King David if he was alive today and running for President? He had an affair with Bathsheba, and killed her husband to get him out of the way. His son, Solomon was one of Israel’s greatest kings, yet his son Absalom brought waves of grief upon his family. Here comes the flip side. He’s known as the man after God’s own heart. He defeated Goliath as a youth—he stayed faithful to God when, for years, Saul hunted him like an animal. He led his people to victory after victory.

An opthamologist might consider David’s life an astigmatism—too unbalanced to lead us down the right path.

But they’re all flawed. We are too—is there any point in analyzing someone to the last detail? If God Almighty forgave David, we should probably forgive our leaders too.

I’m just going with the one who I think will get us where we need to go. How about you?