I grew up in dust. With any sudden movement of person or car, the air would turn slightly tan with a fine sprinkling of middle-of-nowhere dirt. Each cactus, cow and dog would be coated with this layer of fashion. When I brushed our dog, Hershey, the fur was nothing – it was the tan halo that surrounded us that kept this chore an outside ordeal. 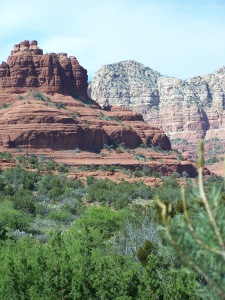 You knew you came from Rimrock when washing your car was a complete waste of time.
We had a tan Buick station wagon. It was originally red, but was painted with Rimrock dirt as soon as we took it home from the dealership. Even the inside was dusty. My friend, Mike, and I would stretch out behind the back seats (who needed seat belts in the 80’s?) and watch the cloudy plume rushing out from our ride. Some kids find shapes in the clouds. We found shapes in the dust.
If you went a few miles down the road, the dirt morphed into a nice rusty-red color. This was how we knew someone had been to Sedona. Yep. It’s not the brand of clothes you wear, but the color of dirt.
A walk home from the bus stop was a great way to build lung capacity. All it took was one car exceeding 5mph and you were holding your breath longer than any Olympian swimmer. That’s when shortcuts came in handy. Walking through the cat-claw bushes and reptiles was far more appealing than gulping in mouthfuls of dirt.
One of the things we westerners experience is dust devils. These suckers will come out of nowhere and bathe you in every layer of dirt and rock known to the southwest.

…the Lord God formed the man from the dust of the ground and breathed into his nostrils the breath of life, and the man became a living being. Genesis 2:7

My mom and I took a trip to the Post Office one fine, scorching hot, sweaty, dust caking to your skin like you rolled around in it, sort of day. Since I was old enough to reach our mailbox, I felt privileged to be able to open it using our super secret combination. These mailboxes had to have been hand-me-downs from the Victorian age, because they were way too ornate and tedious to have been manufactured for us cactus dwellers. I stepped from the dirt wagon and headed into the only elegant ambiance within 100 miles of town. Before I could even squint from the giant fireball that some find so warm, I was rammed by a dust devil.
Hold breath… close eyes, and wait for the mini-monster to pass…
The first thing I noticed as it dissipated was my ears. They felt like they had just been stuffed with rocks. And dirt. Lots of it. My scalp and hair and everything else was congested with the earth of Rimrock.

The one thing that I noticed about growing up in a land of dust was that I always felt a Presence. The land was filled with far more of His creation that mans; it was hard to miss that we were coated in the ingredients we were made from.

The dust, I realized wan not the enemy. The occasional plume I see brings fond memories of childhood. It’s the devils that I could do without.

He is the One who coats you in His love.
And He is never farther away than your skin.